We always make a song and dance 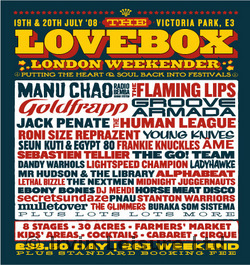 It has become a tradition on these WebPages (well, we did it last year anyway) to tell you all what you have missed with the Music Festivals we attend during the year and annoy you. It serves you right for not having kept up to date on our forthcoming fairs section.

Still, I digress and here is an update on what you can’t see because they have gone. Our first festival was at Knebworth, and this was WILD IN THE COUNTRY, which went BUST IN THE MORNING, and left us LIVID IN THE EXTREME! Still, these things happen so we packed up and went home, to get ready for our three day music event in Kent.

When that opened we were appalled to see that a lot of those listening to the music can only be described as behaving like absolute animals, but on checking we realised that the name of the Festival, Zoothousand, and the location at the Port Lympne Wild Life Centre meant that they were in fact animals! The people who attended were fantastic and we had a great time.

Then came Lovebox in the heart of the east end, in our favourite Victoria Park. What can we say about Lovebox apart from that it gets better year after year, and having provided some traditional rides we found that everyone there loved the good old Waltzer Ride, a favourite for over 50 years now.

Finally, so far in any case, was T4 on the Beach as Weston Super Mare and you really could not have missed this, shown as it was wall to wall on Channel 4 (between Big Brother episodes of course). Tickets for T4 on the Beach sell out minutes after going on sale, and it is so well organised and great fun, a pleasure in which to participate.

However we cannot mention Weston Super Mare without saying how sad we were to see the fire on the Grand Pier, and how delighted to read that it is already reopened for business. This fine Edwardian Pavilion could be viewed from all our rides and we hope that next year the rebuilding will be well underway when we are back on the beach.