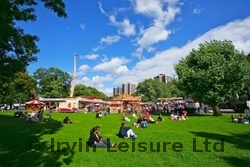 The words “I have had a good idea” normally precede a complete fiasco, but when George Irvin said that in January 2008 he was actually right! George, in discussions with Hammersmith and Fulham Council and the Chair of Leisure, conceived of a two week festival of music, dance, fairground and food for the green island of Shepherds Bush in West London. We would like to thank all the  Councillors and  officers of  Hammersmith and Fulham without  whose help  this would not have happened.

George appointed an independant production company to act as his event manager, and together they produced a varied package to say the least of Country Music, Opera, Rap, Steel Band, Salsa, Indian Dance, Iranian Music, Irish Stepdance, Oompa, Music Hall, and Rock. They also brought together food stalls from right around the world, stretching from Ladbroke Grove all the way to Fulham, but with tastes from Lebanon, Caribbean, Malaysia, China, the Balkans and a Goat Farm who brought their lovely goats, sadly between two slices of bread as burgers and sausages!

The festival ran from July 19th to 27th, with the two weekends hosting music, dance and food, and the weekdays George Irvin’s superb Family Fair. It was at special low prices of £3 for adults and £1 for children for the performance days, and just £1 entry on others with the fairground rides being kept particularly low cost.
Everything about the event worked, apart from me as I spent the time sunbathing in front of the stage and sampling the food, but the rest was excellent. The security and stewarding was first class, the crowds flocked to the Green, it gave an opportunity for local traders to sell their food and also allowed for local groups to sell arts and crafts, and so generated employment activity alongside summer fun. The poster design, which we had featured on our website before the event, was magnificent and it is a shame we only have space for one photo on here as it was great. We will try and put more onto the event website at some time. The acts were eclectic and the staging and audio systems terrific.

Whilst this was the first of its sort we are confident this will be an annual event now and look forward to 2009! Just two things. First of all if you have read the article on Music Festivals you will note that we were at Weston Super Mare just before the pier caught fire. Well, I do not want to think we have some sort of curse but shortly after leaving Shepherds Bush there was a major fire in a former church! Spooky eh. If you check out our forthcoming fairs and live near any of then, we offer very good cut price fire insurance! And have a great fire damage shop too. More details on request, and on Crimewatch!

Secondly, apropos absolutely nothing to do with this article but do have a look at our Testimonials because I am certain we are the only funfair company who have a commendation from a real life judge on their website! He said some really nice things, and the last nice thing I heard from a judge was Not Guilty!