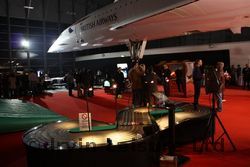 Our regular reader will know that on this website you can read about our wonderful day at the Hendon RAF Museum, amongst the pioneers of aviation. Well in October 2009 we operated underneath the magnificent Concorde in the splendid special pavilion at Manchester Airport.

We were impressed by the enthusiasm and imagination of the staff at Manchester Airport who had identified this hanger as a site for a very special function they were producing, and so of course they invited the best fairground attraction providers to entertain the guests.

Here you can see just a selection of the attractions we arranged, which included Video and VR simulators, 8 track racing, games, stalls, and of course the favourite of so many popcorn and candyfloss stall.

Manchester Airport had wanted a special dodgems set, but sadly it did not quite fit under the wings and for some reason they did not think our idea of jacking up the plane a few feet and putting bricks there for the day was a good idea, so instead of sitting in cars themselves they had the alternative thrill of controlling them from the side on this magnificent 8 lane track.

It is hard to top Concorde and Hendon RAF museum in aviation terms, but who knows what 2010 will bring in flight based bookings for Irvin Leisure. NASA perhaps? We are available as always.