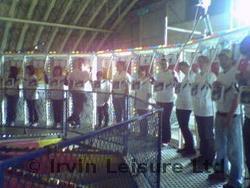 From time to time we are invited to assist in the filming of strange and unusual productions, and one of these was the interesting piece entitled “A Circle of Life”.

When we were approached on this, we were asked to assist on a Channel Four production called, we thought “Zoe Trope”. We originally assumed that Zoe Trope was a bit part actress in Hollyoaks, but then realized that Channel Four would never get involved in a rubbish production like Hollyoaks, and so did a bit more research. We found out that a Zoetrope was a Victorian machine in which cartoons were displayed within a wheel, which was then spun to give the impression of movement. Our contacts told us that they wanted to use a Round Up (see our Rides and Stalls pages for images of these) with real people inside to show the cycle of life, from birth to death.

This was fun to make, and we were amazed at the imagination and versatility of the team filming this short piece. We did our best to assist, and the final results were recently screened. It was fun to make and fun to watch. It is a pleasure to work with such a great team and we wish them success in the future.