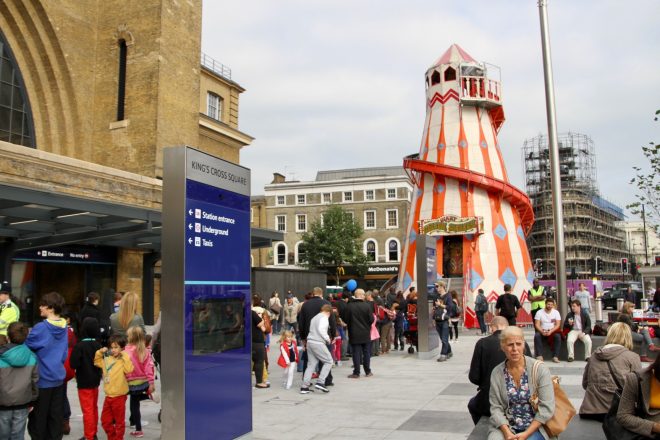 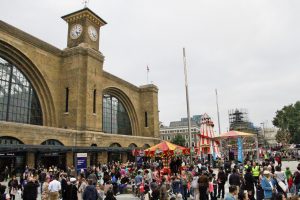 Sometimes we are fortunate enough to take part in some wonderful festivals, and one such was in the concourse of the new Kings Cross Station in the very heart of London. We can only praise the imagination and courage of the team from Network Rail who put this together and thank all those technical staff from London Underground and other agencies involved in the planning. After all, our rides were sitting on top of London’s busiest underground station and all the lines and they did have fears at the start that the next train to arrive on platform 4 might have been our Ferris Wheel sinking slowly through the paving stones! 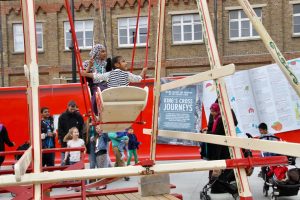 Still, where there is a will there is a way, and the event went ahead. Below is an article written by our friend Desmond Fitzgerald that we believe reflects this marvellous festival. Desmond also took these marvellous photographs. 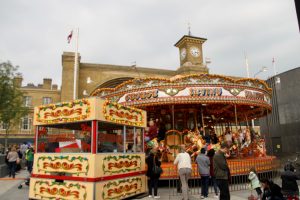 The event over the weekend of 28th & 29th September centred on Kings Cross railway station, which was opened in 1852 with Lewis Cubitt’s iconic architectural design as the London terminus of the Great Northern Railway. The Grade I Listed structure, in what has become the Kings Cross and St. Pancras Conservation Area has been restored over the last five years by Network Rail with support from the Railway Heritage Trust.

The £550 million regeneration follows that of the adjacent St Pancras station which now is the Eurostar terminus and the revamped Thameslink rail route. The frontage of Kings Cross station had become cluttered with what were seen as inappropriate extra temporary buildings and the area generally had become run down with a galaxy of social problems over many years. Previous stages of the overall £2.2 billion redevelopment involved the old station being rebuilt and the former concourse demolished. 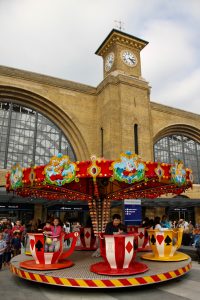 Historically, the Kings Cross district was a thriving industrial hub, from its Victorian beginnings, with freight and commerce taking place using the rail terminus and adjacent Regents canal. The industrialisation including warehouses and subsequent housing that became slums went through an alternative phase in the 1980s with a variety of nightclubs and music venues, but the dowdy image was ever-present 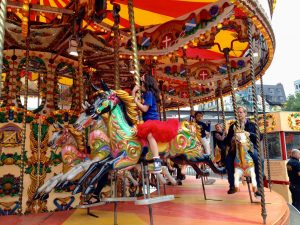 Evidence of further investment on offices and infrastructure abounds with cranes and construction of 2,000 new home visible and now the arrival of Central St Martins, London’s University of the Arts, has added an artistic and educational dimension to the landscape, housed in a restored warehouse, alongside the themed Granary Store shopping mall.

There are further open spaces in the former goods yard, now Granary Square with some of the listed gasometers and Victorian buildings restored, including the Great Northern Hotel reopened.

The creative refurbishment of this rich industrial heritage has earned King’s Cross a place named in ‘England’s 20 Best Heritage-Led Developments’ by English Heritage.

Following the official opening of Kings Cross Square to the public by London Mayor Boris Johnson, with over a dozen Living Statues, the two day festival, Kings Cross Square Carnival and Kings Cross Journeys, was a celebration of this Victorian heritage and the renaissance of the area for business, leisure and travel. 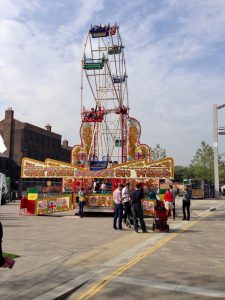 A year in the planning, the festival organisers sought the clock back over a century to mount ambitious presentations of Victorian life, in all its glory as well as the more gritty side with demonstrations of life recreated in music, street theatre, Punch & Judy and installations of a distinctly Dickensian flavour, complete with Victorian themed throwing stalls, even chimney-sweeping demonstrations and fog rising from the ground.

There were three event and performance areas in the festival, with Kings Cross Square in front of the station; Battle bridge Place, at the rear of the re-built station Western Concourse and Granary Square, with its ‘Journeys’ presentation. A specially commissioned, Great Northern Railway themed, land train that transported festivalgoers between specially created mini stations at these last two venues every few minutes, with strolling players along the way.

Central to all this was the funfair, presented by Irvin Leisure, with rides and stalls at the heart of each of the three event areas.

Taking pride of place outside the front of the station was George Irvin’s Pride of London carousel, with Tea Cups and, over to one side almost dwarfed by the station facade’s height, was a magnificent lighthouse slip. Completing the presentation in the new Kings Cross Square was one of Irvins’ old fashioned candy floss carts and build up stall.

A bandstand was installed for the event in front of the station facade and there were additional build-up foodstalls with sampling of food and drink from both national grocers and cottage industry food purveyors. 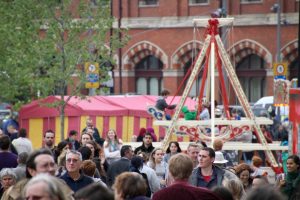 The greatest challenge was ensuring that the rides and attractions complied with the exacting weight ratio calculations that varied across the performance areas, not least because below the concourse at Kings Cross sit the tunnels and interconnections between no less than five London Underground Tube lines, the greatest intersection of the colour-coded lines on the whole system, in addition to the re-routed Thameslink line.

Additionally, the reconstruction of Kings Cross area has been one of the most exacting construction projects in Europe with very strict requirements on weight distribution, vehicle movement and on-site working, before considering the artistic appropriateness of the Showmen’s equipment being operated and powered.

All this was taking place when all the rail lines and termini were in full operation over a busy weekend, adding to the carnival atmosphere, but also making the customer flows more complicated.

Further round in Battle bridge Place were a set of mini chairs, with picket fencing surround, stood next to Victorian swingboats on specially prepared decking with weights instead of stakes. Another of Irvins’ old fashioned candy carts and build up gamestalls completed the presentation here. 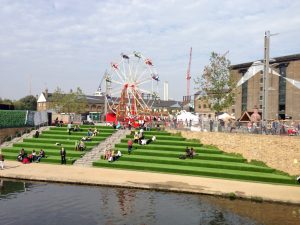 Over in Granary Square, the other end of the new Kings Boulevard, where the GNR land train stopped,  stood the Ferris wheel, set above  a stepped lawn next to Regents Canal and overlooking the wide-ranging Victorian life recreation of home, commerce, industry, play and live music. The Granary Complex, which once held Lincolnshire wheat for London’s bakers has been gloriously restored by Stanton Williams Architects and overlooks the fountains of Granary Square and won the Mayor’s Award for Planning Excellence in 2012.

It was appropriate that this tableau of a bygone age was laid out in front of the relocated Central Saint Martins college, which recently joined with others under the banner of University of the Arts London. The world famous art college, which gave us fashion designers Stella McCartney and Alexander McQueen, singer Jarvis Cocker, painter Lucian Freud and sculptor Antony Gormley, is likely to be the backdrop of further similar festive events, with the artistically minded  in and out of the collegedrawn to the exciting new environment at King’s Cross.  The relocation of the university here reinforces the cultural and creative pull of the area, which should be good news for all concerned.

Speaking with George Irvin following the weekend’s festivities he expressed both delight and relief that it had all gone so well and that the rides and attractions fitted in so neatly with the overall theme and that they were enthusiastically sampled by Londoners and tourists alike.  George felt that it was all worth it following so much detailed preparation and planning with organisers who included Network Rail and the developers as well as public authorities.