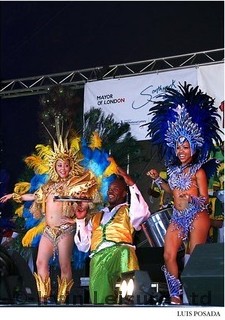 On August 3rd, Burgess Park in the heart of South London got into the spirit of all things Spanish, Portuguese and Latin American at the Carnaval del Pueblo, the biggest wrongly spelt Carnival in the capital.  Over 130,000 people turned out to watch the colourful procession of floats, enjoying entertainment from world class stars and Grammy Prize winners, such as the Rosario Brothers and Grupo Niche. The Open Salsa Dance Championship is held publicly in the open air throughout the day, plus there were market stalls, great food, and an electric atmosphere not to be missed plus of course George Irvin’s Fabulous Family Funfair.

The Carnival kicked off at midday with a lively procession from Elephant and Castle which, whilst not Sugar Loaf Mountain still looks good with the carnival dancers! Then it continued down Walworth Road, Camberwell Road and Albany Road into the park where the merry makers enjoyed live acts, which had already started at 10 a.m. and continued to 10 p.m.

The fair opened at lunchtime, and was superb. Without doubt this is the best festival in South London each year, and whilst we did not try out the Salsa Dance Floor ourselves plenty did! There were displays reflecting Brazil and the Andes, and do not ask where the Andes are because we will only say at the end of our Armies!

We now look forward to The Mix in the same park later this month and to staring at more photos of the Carneval Dancers on the website www.carnavaldelpueblo.com, for purely artistic and cultural reasons of course!