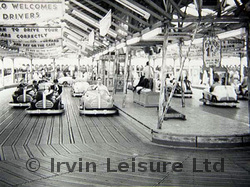 Funfairs have been part of motoring festivals since the first engineer shoved the first engine in the first vehicle and the first driver complained about the high cost of petrol. In fact many fairground attractions were modelled around the concept of speed and racing, with perhaps the most famous of all being the Brooklands Speedway, shown here in a classic black and white photograph, as operated by the Irvin Family way back in the late 1940s, then the 50s and 60s.

Funfairs in Britain date back hundreds of years, and around Britain you can still find the original charter fairs in operation, perhaps the best known of these being in Newbury at Michaelmas or Pinner in north London in May each year. Fairs were found on route to horse racing events and of course everyone knows and loves the annual Epsom Derby Fair which is as much part of that wonderful race as the horses themselves. Mind you, the bookies would probably prefer the horses to stay than the fair if they had to make a choice as they would not win much from people betting on the Carousel stallions! Many of those early attractions would not look out of place in the 21st century.

The record of funfairs at Silverstone again dates back to the earliest days that the circuit opened with the first recorded fair at the Touring Car races in 1949 and wherever the Grand Prix was held in Britain there would be a funfair to back it up, always aimed at providing superb family entertainment and always with high quality attractions giving great value.

Amongst favourites over the years, you cannot beat the Dodgem Cars for fun and entertainment as drivers imitate their heroes in rather safer surrounds. With children’s attractions developing from simple items such as swingboats to the more sophisticated Formula Track Ride, and games evolving from coconut shies and hoopla stalls to video virtual reality options, the funfair in 2009 will give just as much pleasure as the fair in 1949, and will be a Classic Fair for a Classic Festival.