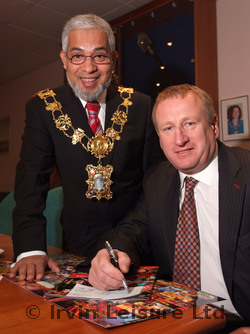 Most of you reading this will have at some time been at a function attended by the local Mayor, and you will have seen them with their chain of office and making a presentation or a speech. However most of you will not realise how hard working these local Mayors are and how important their role is, even in the 21st Century.

Now of course the Mayor of London is directly elected, as are Mayors in some other authorities, and they have managerial and political roles to perform. In other Councils, such as Tower Hamlets, the Mayor is chosen by the Council each year and whilst their job is not political it is vital. After all it is the Mayor who is the public face of the borough.

In Tower Hamlets, the Mayor for 2008 – 2009 is Councillor Mohammad Abdullah Salique, seen here with George Irvin. His chosen charities are APASENTH (Asian Parents Association for Special Educational needs in Tower Hamlets) and the Child Care Consortium and we were delighted to raise funds for this at our annual Mile End Fair in July, where we also raise money for the Friends of Mile End Park. This fair, strongly supported by Tower Hamlets Council and well served by the excellent local police, has been running for well over 50 years now and is much enjoyed by local people.

Irvin Leisure also hold similar days in many boroughs and on our news pages and articles you can see more information on our work with charities.