Fairground equipment for your set 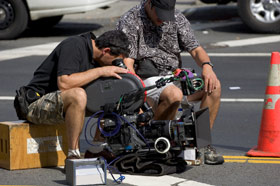 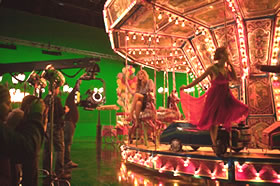 Film and TV sets require a special sort of provider. One that knows the industry intimately and has a proven track record in delivering rides, funfair props and entertainers that fit in with your shooting schedule, at your desired location.

Irvin Leisure has worked closely with the BBC and Channel 4, among many others, providing amusements for years – we know what you expect.

Logistics aren’t a problem. We have a team of drivers country-wide with the equipment, transport and generators required to ensure your shoot has what it needs.

Music videos, Adverts, Features, Soaps and Sit-coms and everything in between – all can benefit from having a reliable contact for fun fair rides and entertainers.

To see ourselves as others see us!

From time to time we have requests from photographers who want to come and film our rides for their own portfolios, and we love to help. These webpages feature some, but none better than these taken by our friend Colin Bridgewater and so he has agreed we can share them with you!   They seem […]

Food for thought as we are mentioned in Dispatches

On Monday 7th April, the professional team from Dispatches at ITN broadcast a thought provoking programme on sugar content in “low fat” food. It was so good that your author, not a think type of a bloke, is now only chewing on lettuce leaves! However whilst the programme was superb, the creative thinking that went […]

We cannot tell you much about this photo at this time other than to hint that we were thrilled to be part of the filming of an episode of a famous Detective series to come up later this year. Lots of drama and great acting, plus the odd corpse here and there, and some of […]

The only way is Essex for Irvin Leisure.

Now we are not people to give anything away in advance (as if, would we do that? Not half as you will know dear reader) but on Sunday 24th April watchers of the very popular and entertaining programme “The Only Way is Essex” saw a party and also some fairground rides provided by us...

We won’t make a drama from a synopsis

At Irvin Leisure we welcome the opportunity to give assistance to film and dramatic companies in their work, and at Clapham Common in February 2011 we will be delighted to work with Nick Ray Rutter from Saloon Films as he shoots a brand new drama.

Last Autumn a group of photographic students from Richmond College joined us at Turnham Green in Chiswick as part of their studies and they promised to share their work with us.

Irvin Leisure was delighted to host the filming for the official video for Slow Club's new single - Giving Up On Love - featuring a special performance by none other than Mackenzie Crook.

We are a Model Company

Mirror Image for Irvin’s at Marks and Spencer

Irvin’s get stamp of approval for film work!

We knew the Post Office was in trouble, but things have reached Horrific levels now! The Royal Mail are to launch a new series of stamps celebrating Hammer House of Horror and Carry On Films, and they have come to Irvin Leisure for help. Also, learn about our film work in 2008.

Irvin Leisure Filming? You are having a laugh!

An exciting and innovative film undertaken by Irvin Leisure in 2007

Proud To Be Part Of A Thought Provoking Drama.

Irvin Leisure were proud to participate in the filming of a major drama for Channel Four, and you can read how we went about assisting in this major project