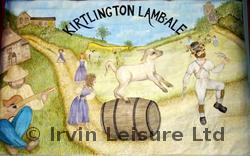 We have now gathered more information on Ben Phelps, founder of the fairground dynasty that is now Irvin Leisure Ltd, and for the benefit of our many reader who studies this page (because he rings me from time to time) here are our latest findings, provide by our great friend and archivist Keith Chandler to whom we offer our thanks.

Keith is a social and cultural historian with a particular interest in the 19th century. He has published a lot on Morris and social dancing (the sort done in the dancing booths), on traditional music, and on Gypsy culture. He is working on two books at the moment – fair going and the dancing booth phenomenon of the 19th century; and Gypsy musicians active before 1900 and has identified 259 individual players so far, some of whom also kept dancing booths.

Ben Phelps (or is it Philps, as it is spelt in this way in many old documents… maybe Ben’s spelling was not consistent. After all Shakespeare was a shocking speller and to be honest his jokes were not up to much either) was according to Parish and census records, born inHigh Wycombe, Bucks, around 1811.

The census of 1851 records he was describing himself as a Traveller and living in Kirtlington in Oxfordshire and around 1854 his first daughter, Sarah, was born in Hillingdon in Middlesex. His second daughter, Harriet, was born in West Drayton, Middlesex, in 1858.

The 1881 census shows that on 3rd April he, with Harriett his wife, Sarah and Harriett his daughters, and a servant named Edward Phillips the family were living in Hegderley Dean in Bucks. Harriet married William Irvin in 1882 in Lambeth, then Surrey but always southLondon, and in 1882 in Eton, his eldest daughter Sarah sadly died.

In 1901, Ben and Harriett are still living in Hedgerley Down, aged 89 and 71 respectively, with Ada Irvin aged 16 by then and Ben given as aged 9 but should be 11, and another child of William and Harriet named Ethel, aged 8. The rest of the family were out operating at fairs at that date and so not recorded.

Ben Phelps is recorded as having died in 1903 in Eton at the grand old age of 91.

Our other good friend and archivist John Comino-James has completed the story of Ben Phelps with the following death notice.

You will be most interested in the following article found in the Jackson’s Oxford Journal, 24 June 1848  which records Kirtlington Fair, knows as the Lamb Ale, where dancing booths as operated by Ben at that time were a common sight.

“KIRTLINGTON LAMB ALE. – A series of festivities of six days duration, and said to have been held since the days of John of Gaunt, who it is recorded had a palace there, were commenced on Monday last. The Morris dancers, with the lord and lady, preceded by a man carrying a lamb, went in procession through the village, after which “the hall” was opened, where the visitors were supplied with cake and ale. Dancing booths and other amusements, with eatables, toys, &c. were in abundance. It is held on Trinity Monday, and lasts the week. On Tuesday the Morris dancers are entertained at Sir George Dashwood’s. Formerly the festivities were held on “The Green,” now enclosed, and around which were nearly 20 cottages, now demolished. The lamb was formerly slaughtered, as well as carried round the village. The villagers say that the lamb ale entitles them to freedom of toll in all fairs and markets.”

Kirtlington Lamb Ale continues to this very day, but probably with a little more decorum!

Now finally a poser. From where did the Irvin branch of the family come? We know that Harriet Phelps, or perhaps Philps, married William Irvin from South London in the late 19th Century. However we do not know much about William’s family before that, so do you? We know that there was a William Irvin in Mile End Workhouse in the mid 1860s, but was he a forefather of William who married Harriet? Can you help with this and let us put another piece in this jigsaw? We would love to hear from you so email george@irvinleisure.co.uk and we will put your information on to this article and give you full credit for your help!