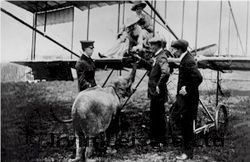 On June 14th and 15th, the Royal Airforce Museum in Hendon will celebrate the 90th birthday of the RAF and the centenary of powered flight in Britain by staging The Hendon Pageant. Irvin Leisure will proudly participate in this not to be missed festival. This will be an Edwardian Extravaganza at the RAF Museum Grahame Way , Colindale, NW9 5LL with free admission.

The RAF Museum is built on the site of what used to be Hendon Aerodrome, which was operational right through until 1957 and where the last plane landed in 1968, being delivered to be part of the then under construction RAF Museum. The Museum eventually opened in 1972. Below you will find a brief history of the site, and our photo shows a very early image of Hendon Airport featuring an aircraft that might be part of the collection on site, a pretty young woman who certainly is not, and a rather inexplicable elephant. It does strike me that if you are trying to impress a good looking young lady, the fact that you are a pioneering pilot may well suffice and the introduction of young jumbo is frankly a little over the top!

Local factory owners Everett and Edgecumbe were the first to experiment with flight in Colindale when they designed and built an aircraft known as the “Grasshopper” because it could not actually fly and presumably just hopped around a lot. This was one aspect of their business that really did not take off! Then in 1910 the Daily Mail sponsored an air race from London to Manchester and the winning pilot, a Frenchman named Louis Paulham, had taken off from Hendon. You can imagine the reaction of today’s Daily Mail if a race they ran was won by a Frenchman. They would be hopping around as much as the Grasshopper.

The first person to build a proper airfield at Hendon was Claude Grahame White, a great enthusiast for flying and a forward looking business man. He arranged for the first Airmail Service to start from Hendon and also began the tradition of Pageants with the first ever aerial derby in 1912, attended by 500,000 people. He also opened an Aircraft Factory on site which at its peak during World War 1 employed 3,500 people. His aim, as he expressed it, was to see Hendon become “the Charing Cross of international Air Travel” which we assume at the time was meant to be a recommendation.

Hendon was commissioned by the War Office during the First World War to be a military base and they eventually took over the entire site, refusing to return it to Grahame White despite his requests. He was left with just a small flying club on what is now the base for the police college, became disillusioned with flight which in this country was much the poorer for his loss. From that time Hendon was a major base for the newly formed RAF.

During the 1920s and 30s the Pageants became annual affairs, attended by tens of thousands of people, as the RAF sought to recompense local people for the disruption they suffered. Then during World War 2 the site was partly used for fighter squadrons, but more needed as a secure base from which VIPs could be ferried around Britain and Europe.

The 2008 pageant is themed around the early days of flight to celebrate 100 years of powered flight in the UK and the 90th birthday of the RAF, so you can come in period costume if you like. Irvin Leisure will be providing an Edwardian Fair with Carousel, Swingboats, Helter Skelter and lots of fun and games. You will be able to see the aircraft close up and meet the flight crews of the time in period costume and also many of the pioneers of early flight will be there to talk to you.

So, you can admire these ancient aircraft and wonder at the bravery of those who flew in this rickety inventions. Also, think of the courage of the first people to fire a machine gun through a propellor! For those like me who find the Helter Skelter the ultimate in our daring, this is incredible. What bravery they had. Or madness. Or both! But what a debt we owe them all as we hop on our flight to the sun each year and give our bit to global warming as we do so.

There will be participation activities too where you can help your children create Edwardian fancy hats, and there will be judging at 3 pm on both Saturday and Sunday for the best family in period costumes.

So come and help us celebrate the magnificent men in their flying machines. Entry to the Festival is completely free, and if you cannot make this weekend then do visit the Museum at any time, and it is always free of charge. Nearest underground is Colindale, and if you are driving enter from the Edgware Road between Colindale and Edgware, or visit the Museum website on www.rafmuseum.org.uk/whatson  This is a weekend we anticipate with much pleasure.