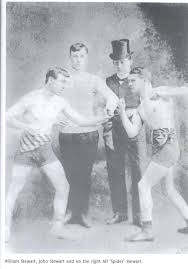 Another branch of the family that now lead towards George Irvin is the Stewart family whose life in fairgrounds dates back to the 1930s. In fact the Stewarts were boxers with a tradition of professional boxing and running boxing booths in fairs dating back to the Great War of 1914 to 1918.

Perhaps the most famous of the male boxing Stewarts was Alf, known as Spider, who was described in Boxing News as being of championship class, and whose reputation in the boxing trade was so strong that he actually had a world champion, Primo Carnera, appear at his fairs in 1933 giving exhibition fights.

Alf sadly died in 1948 and his passing was as much featured in the sports press as in the fairground newspapers, because he was a proper professional fighter and also a wonderful showman. The obituary in the renowned Boxing News of May 19th 1948 gives him credit as a sportsman as well as a showman, and he was given credit for being able to make very ordinary fighters look great in his shows , “turning a chump into a champ” was the description but he would be proudest of the description of him being a champion quality fighter who would have won titles if given the opportunity.

However his daughters, the fighting Stewart girls, carried on the tradition, not actually fighting but promoting the shows. It is interesting to speculate in a year when women’s boxing has finally been accepted as an Olympic Sport, one wonders if they too would have tried to participate?

Polly Wilson (nee Stewart) is very much around these days and is George Irvin’s maternal grandmother, and given that the Wilson branch of that family were involved in Lion Taming and that Polly comes from a boxing tradition, perhaps George better behave with his mother! 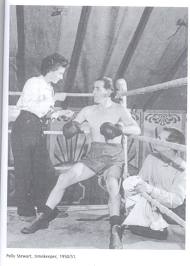