A poetical tribute to our family history, circa 1950. 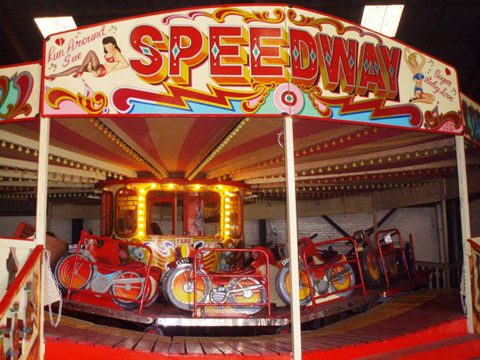 Henley Regatta   (Anonymous….any help to trace the author would be appreciated.)

Regatta time comes once a year
The Traylen-Irvin crowd are here
With fair so large,, well that we know,
The two combine to do the show.

Trailers, lorries, diesels too
Caravans of every hue
An old red lorry with starry bonnet
With “Thrills galore” all painted on it.

The Irvin Speedway’s black jeaned crew
Micky, Buzz and Billy too.
Coloured cars all bump and forge
Are all maintained by worried George.

You’ll have your ride the hooters blown
By George…complete with microphone.
So smart in grey the girls all swoon
But though they wait George will not croon.

So move on down and you hear shouts
From those who ride the roundabouts.
Billy, Benny, helped by John
Those gallopers they work upon.

Although they’re busy Ben must try
Upon the swings to keep his eye.
The work of course they all must share
While Bill and John collect the fare.

No time to chat no time to stand
Cos old George Irvin’s watch in hand
He’s kept quite busy working hard
To keep a check on all the yard.

Like George and Arthur Traylen too
And keep an eye upon his crew
His men you see set him no riddle
He knows that they all try and fiddle.

So off you go and take a trip
For fun and thrills upon the Whip
And there sits Vic so dark and cross
To drive the thing for Traylen Bros.

‘Tis here you’ll find there’s no one sweeter
That bronzed good looking Tayan Peter
His shirt is checked in black and white
With golden watch, a handsome sight.

If speed you seek then do not meddle
Call Peter in to work the pedal.
He’ll make it spin it is a thrill
And ride the skid with all his skill.

He is the chauffer of the blokes
In old cream van for meals and smokes.
Consider him the Stirling Moss
Of those who drive for Traylen Bros.

But on you move and for a lark
Climb up the stairway to the Ark.
It speeds up fast and will not tarry
For Wheeler here and little Harry.

But if you’ve some to see the show
Then on the bumpers you must go.
There sits the boss, who’s sure to be
Counting the cash most happily.

Then there’s sideshows…near and handy
Hoopla in the charge of Andy
Little stalls with lights a twinkle
That one there belongs to Winkle.

The Irvin crowd are in a state
About the lorry by the gate
The poor old dear is running hot
And she’s the one to drive the lot!

Fuel in plenty she will burn
To till her up all take a turn
George climbs up on the bonnet high
To see that she’s not running dry.

Then calls Billy and says “ You oughta
Fill the old girl up with water”
She’s so hot now near on the boil
But Ben’s in time with diesel oil.

You’ve done the rounds and you must go
And leave behind the funfair show
Though the evening has been really thrilling
Time for home with feet’s that’s killing.

The crowd are off it’s been a hit
And once again the show must split
All taken down and neatly stacked
And in the lorries quickly packed.

The lorries start without a fuss
All except for one old bus.
But do not worry you can bank
On Peter here to turn the crank.

The Traylen crowd will soon be heading
On their way and head for Reading
But Irvin’s crew and off instead
To do a show in Maidenhead.