A part of our history rediscovered. 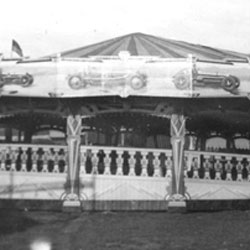 In the 50s and 60s, the Irvin Family owned and operated a fantastic and popular Brooklands Speedway track, and below you can learn all about these rides.

A similar ride to the hugely successful Dodgem, the Brooklands Speedway track (sometimes called a Rally Track) was introduced in the late 1930s – aspiring to the famous Surrey race track of the same name. It was pitched at young male patrons with gag cards stating, “Drive your own sports car!” The cars were driven in one direction, along a slightly banked track and the idea was that riders to raced eachother.

It was a faster ride than the Dodgem, but lacked the excitement generated by one car crashing into another. Unlike the Dodgem, Speedway cars took their power from the floor and not the ceiling nets as with a Dodgem track. Orton Sons &Spooner, who had produced many Dodgems, produced just two Brooklands devices. One was commissioned by R.Edwards & Sons of Swindon and this track survives as part of the Fairground Heritage Trust collection.

Ordered in 1938 (measuring 80 by 40 feet) it originally had a fleet of ten cars made by Rytecraft. These were later replaced by Supercar models. When built up the paybox sits in the large island centre of the track. With a capacity to carry only 20 patrons, the Brooklands was a lot less profitable than the Dodgem, making it less popular with showfolk. However, interestingly the concept of cars being powered through the floor and not the net over the ride through poles has re emerged in our very popular indoor dodgems track, so as they say what goes around comes around, which is most appropriate with dodgems cars!